Adrian Ward's an interesting chap. He worked on race motorbikes and F1 cars for fifteen years before joining the design team behind Marin and Whyte bikes. He built the first Whyte PRST-1 prototype, although he now reckons that bike works better with a 24in front wheel. Post-Whyte he vanished from view a bit, then did a bit of work for the reborn Nukeproof and has now launched his own bike brand. Award Bikes (see what he did there?) seems to have been a bit accidental -- he designed a bike for himself initially, had it made out of titanium by XACD and has now decided to make them available to customers. And here it is: 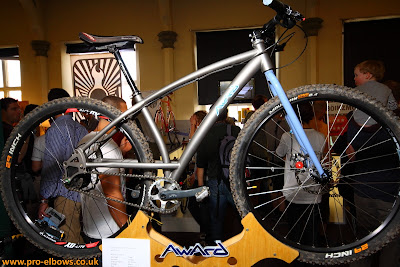 You'll no doubt have immediately noticed a couple of things about the Award. Most obvious are the chainstays, which don't join the rear axle and bottom bracket in the usual way. The elevated chainstay design had a surge of popularity in the early 90s (Yeti Ultimate, Funk, Alpinestars, Fisher Montare, jumpers for goalposts etc), with various benefits being touted including chainsuck prevention and the ability to have very short chainstays. None of this proved terribly compelling and the design died out, for hardtails at least.

With 29in wheels, though, designers have been falling over themselves to get chainstays as short as possible. It had struck me that e-stays might stage a comeback as a result, and here they are. Ward's not the first, some US custom builders have done e-stay 29ers before, but the Award takes things to fairly impressive extremes. With adjustable dropouts, the back end can be between 405 and 425mm long. 425mm is regular 26in chainstay length, so on a 29er that's properly short. You can get 2.5in tyres in it, too.

The front centre is short too, with just enough room to get the front wheel past your foot and the overall wheelbase being shorter than a typical 26in hardtail. Whether that's desirable or not is open to question, but vive le difference and all that. 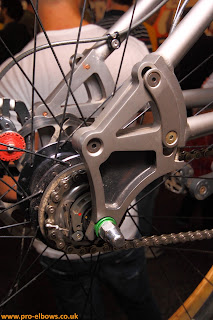 The adjustable dropouts are a fairly spectacular bit of work in themselves, and looked right at home in Brunel's engine shed in which Bespoked was held -- the Victorian engineer would have been pretty impressed by these, I reckon. The dropouts pivot on the bolt at the back, are adjusted by the vertical bolt under the front and locked in place by the other two. The whole lot is machined out of titanium.

The downside of the ultra-short chainstays is that you can't use a front derailleur -- there's nowhere on the frame to fit one, and even if you could the cage would collide with the rear tyre. Hence the Shimano hub gear on the show bike. Or you can singlespeed it if you wish. It'll take an 80mm suspension fork too.