This weekend I went to Bespoked Bristol in, um, Bristol. It's sort of a UK equivalent of the US's North American Handbuilt Bike Show (NAHBS, which doesn't stand for Not Another Huge Beard, Surely? as some may think). 2012 was the second year of the show -- I didn't go in 2011, but people I chatted to who did (this is what passes for research around here) said it was much, much bigger this year. It was certainly big enough to impress, and the attendance was substantial too. I popped out for some lunch a bit after midday on Saturday and there were people queuing to get in then.

There were, of course, many shiny things to look at. Attracting a great deal of attention was the new Cotic Rocket full suspension bike, which might seem like an odd thing to be drawing the crowds at a somewhat nichey show like Bespoked. But it's unusual in that it's (mostly) steel. It's impressive how far Cotic has come -- I remember owner Cy Turner coming to my house in 2003 with one of two prototype Soul frames, and here he is nine years later with a range of eight frames including a ground-up FS design without a catalogue part on it. There are quite sizable brands who haven't entirely designed their own FS bikes, and Cotic's still just two people.

Anyway, enough verbiage, here it is: 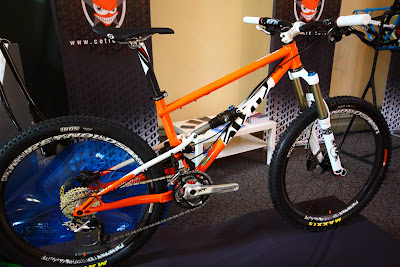 Pretty smart-looking, I'd say. With most of the industry obsessed with curving and bending everything in sight, making a bike out of straight lines is something of a novelty.

But why steel? Although Cotic's reputation is built mostly on steel hardtails, Cy's not wedded to the material -- the first Cotic FS bike, the Hemlock, was aluminium. Aluminium is less dense, so you can use more of it. But in places you don't necessarily want to use more because there isn't room, like a seat tube that's got to have bits of suspension hanging off it, you get a stiffer tube with steel. The Rocket's 35mm seat tube is fat by steel standards but not by alu ones and is, apparently, very stiff. Once you've made one tube out of steel you kind of have to make all the others out of it as well, or at least the ones that you want to weld on.

The Rocket has an aluminium swingarm, because it needs all sorts of chunky machined bits that would end up very heavy in steel, including the dropouts that accommodate a 142x12mm rear axle. The 150mm rear suspension uses Cotic's own Droplink setup, with a little aluminium rocker controlling the arc of the seatstays to alter the spring rate through the stroke as well as dealing with side loads on the back end. The rear brake caliper is mounted well forwards in a position that Cy established -- from experiments with the Hemlock -- minimises the effect of braking on the rear suspension.

And the weight? Claimed heft is 7.3lb including a Fox Float RL shock. Sounds heavy? Well, aluminium bikes in this class aren't crazy-light -- a Santa Cruz Butcher with the same travel is 7.45lb. So the Rocket's in the ballpark. As is the price, starting at £1,350 for frame and Fox shock, with other shock options available.