I was only vaguely aware of Ted "Superted" James before Bespoked Bristol. He moves in circles of which I'm only dimly aware -- fixed-gear freestyle and all that caper. His workshop is in Brick Lane, which tells you pretty much everything you need to know. Actually his output is more diverse than I'd thought -- he's done track, road, touring, cargo, mixte roadster, all sorts.

For Bespoked, Ted unleashed (and there really is no other word for it) his latest project, the 29Gnar. Which is clearly one of the very best names for a bike ever. And here it is: 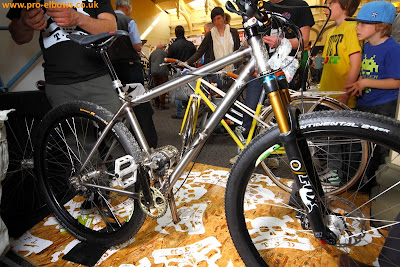 At first glance the 29Gnar looks like a 29in MTB of the all-mountainy persuasion -- long fork, laid back, dropper seatpost -- which isn't a massively common breed but at the same time not entirely unique. But the second glance (and subsequent doubletake) reveals the Shimano hub gear positioned inside the main triangle above the bottom bracket: 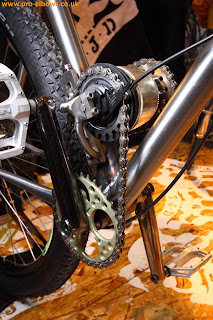 Again, this isn't a completely new idea, although I can count the number of times I've seen it on a hardtail on the fingers of one finger. What is new is the rationale. For the 29Gnar is actually a dual-purpose bike. With gear hub in place and sus fork up front, it's a mountain bike that you can ride places. Or you can remove the gear hub completely, flip the rear wheel around and put a rigid fork in and turn it into a (somewhat lighter) fixed-gear freestyle bike in not much time at all. Ted reckons ten minutes, although I'm going to speculate that he's handier with spanners than me.

To make it all work, the 29Gnar needs a 135mm rear hub that takes a fixed sprocket one side and a disc on the other. Ted made that too: 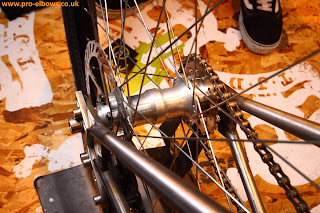 He ran out of time to finish everything off before the show, so details like cutting the fork steerer down and cable guides and paint were omitted, and some of the hub gear mounting hardware was clearly slightly of the last-minute persuasion -- Ted was still building it at 6am on Friday morning.

Clearly the 29Gnar is a very niche bike, but that's what Bespoked is all about. And as an advert for Ted's ingenuity and fabrication skills, it can't be beaten. Have a browse around at Ted's site to see more.