Remember that prototype Orange 29er FS bike that was doing the rounds a while ago? It's now a real bike that you can buy. It's called the Gyro and is initially available as a limited run of 50 "Black Gold" bikes at £2,799.99. Here it is: 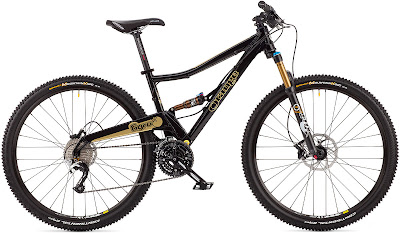 Clearly it's got a lot in common with Orange's ever-popular Five, and it's built in Halifax from a combination of folded aluminium monococque sections and more conventional tubes. As you might expect, Orange has gone for a fairly relaxed trail-riding geometry rather than full-bore racer -- the Gyro's got a 69.5/73.5 angles. There's only two sizes in the initial run, with the Medium having a 593mm (23.3in) effective top tube and the Large being 613mm (24.1in). I'd expect at least an Extra Large option to appear when the Gyro starts getting made in bigger numbers -- Orange makes a 22in Five, after all.Wheel travel is 110mm at the back and 120 at the front.

Looks good. I want a go. Find out more at http://www.orangebikes.co.uk/bikes/gyro_black-gold/.