Alongside its new Saint components, Shimano has also announced another gravity-oriented group pitched at a lower price point. It's called Zee, derived from "zero" apparently. "ZEE will give their riders a sense of freedom when they hit ‘zero gravity’ on the extreme trails!" it says here. Let no-one say that Shimano isn't down with the kids.

This isn't the first time that Shimano has launched affordable freeride parts. Hone was launched the year after the original Saint into a similar position, with a similar axle-mounting derailleur and through-axle hubs. Like the original Saint it was only a partial group, and never really took off -- other than the rear mech, the rest of Hone was a bit too much like the same year's LX group with a lick of black paint.

Zee, though, looks like a much better effort, being a lot closer to Saint in spirit. Here's the full lineup: 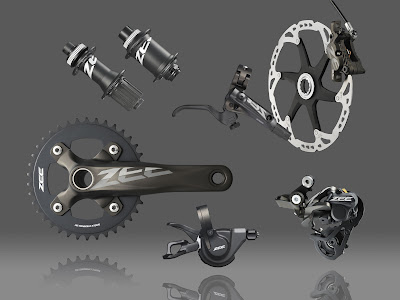 Taking a closer look at the various bits and bobs, it's clear that Zee has most of the useful features of Saint -- it's very much as SLX is to XT, which is no bad place to be.

No word on weights or prices yet, although I'd expect it to be somewhere around SLX money when it goes on sale in July.